Brescia Mobilità Spa
It is a limited company, partly owned by the municipality of Brescia. It was founded in 2001 to manage the mobility services of the town. Now it controls the different services directly or through its controlled companies:

Metro Brescia Srl
The “Metro Brescia Srl” is a company owned by “Brescia Mobilità spa”. It was founded in 2011 to carry out activities related to the operation, maintenance and management of the metro underground.

The idea to provide the city and the province of Brescia with a subway system was born in the eighties, following the example of the first light automatic metro, which were born or had just been completed in France. The city of Brescia, with slightly less then 200,000 inhabitants and an hinterland of about 400,000, is a highly urbanized capital of province. The area generates an intense traffic flow in and out and within its nucleus.
In 1985, the municipalized transport company of the city, ASM Brescia, supported a feasibility study for an integrated transport system, with the goal of achieving greater efficiency in transport, while ensuring the protection of the environment and reducing pollution.

In 1987, two feasibility studies were commissioned. The result of the analysis led to the identification of an automatic transport systems, already experimented in some large European cities, as the best solution for Brescia. In 1994, requests for state funding were submitted, according with a national law for interventions in the field of mass rapid transit systems. The funding was awarded in 1995, while the regional grant was given in 2002. In 2000, an international tender was run for the award of the first functional segment of Metro Brescia, for about 13 km. The tender was won by a consortium consisting of “Ansaldo” rail transport systems, “Ansaldo Breda”, “Astaldi” and “Acciona”. The companies proposed a system of automatic underground similar to that which had recently been made in Copenhagen.
The inauguration of works was in November, 2003. The excavation of the deep tunnel, which runs on average at a depth of 25 m below ground, began in 2006, through a Tunnel Boring Machine (TBM).

The line was inaugurated and opened to the exercise on March 2nd, 2013.

The main features of the system

The light metro system of Brescia is the first metro line in Italy which serves a middle-size city.
The track starts in the south-eastern area of the city and reaches the northern part; the metro serves the old city, the two main hospitals, the rail station, the universities, all the areas with high density of population and the business district.
The total length of the track, between the terminal stations, is 13.7 km;  6 km, in the middle of the track (which also covers the old town),  are in deep tunnel excavated by TBM, 4.7 km are in  trenches, 1.3 km are at street level and 1.7 km are on elevated viaduct.

Figure 1: Main features of the system. 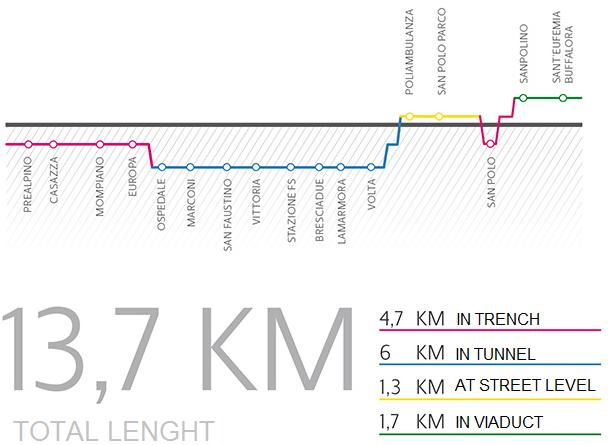 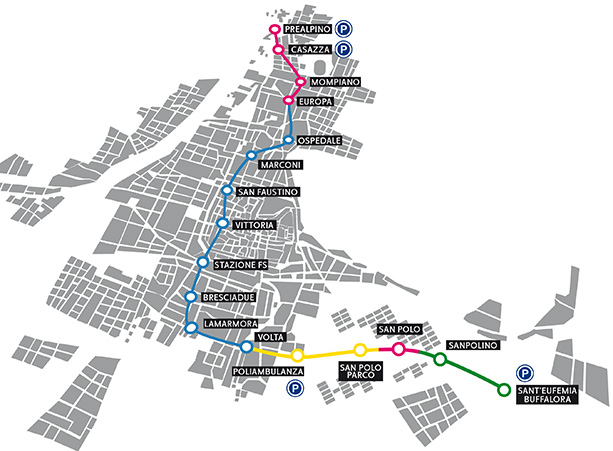 There are 17 stations: 8 are in tunnel ( Hospital, Marconi, San Faustino , Victoria Railway Station , Bresciadue , La Marmora , Volta) 5 in trenches ( Prealpino , Casazza , Mompiano , Europa, San Polo), 2 at street level (Poliambulanza , San Polo Park ) and 2 in elevated viaduct ( Sanpolino , Eufemia Buffalora ). The stations would represent a "calling card " of the city and of the transport system; for this reason they have been designed with particularly care in aesthetics . They are warm , comfortable , accessible and safe; they have small size, internal paths are short and direct , diffused lighting , modern communication systems , information and remote monitoring . For stations in tunnel,  a " spatial continuity " from the outer surface to the floor of the dock has been created , thanks to plenty of skylights on surface and by eliminating the traditional mezzanine floor. The amount of natural light coming from outside , gives to the passenger the opportunity to perceive the sky and open spaces; these characteristics give a perception of strong security .

The fleet is composed by 18 metro trains, which, in turn, 16 are used in line  and 2 are available at the depot for maintenance and spare. At its start, the system guarantees a transport capacity of 8,500 passengers / hour in each direction, with an interval between trains of 180 seconds; it’s used, for the 1st year of operating, a fleet of 10 trains +2.

Depending on the transport request in the future, the fleet will be increased ; with a working fleet of 34 trains the system will reach the maximum capacity  with 17 thousands passengers / hour in each direction and with an interval between trains of 90 seconds.
The service works from 6:00 a.m. till 10:30 p.m. (12:00 p.m on Friday and Saturday); the frequency is from 6 to 15 minutes.

Figure 3: Timetable and frequency of service. 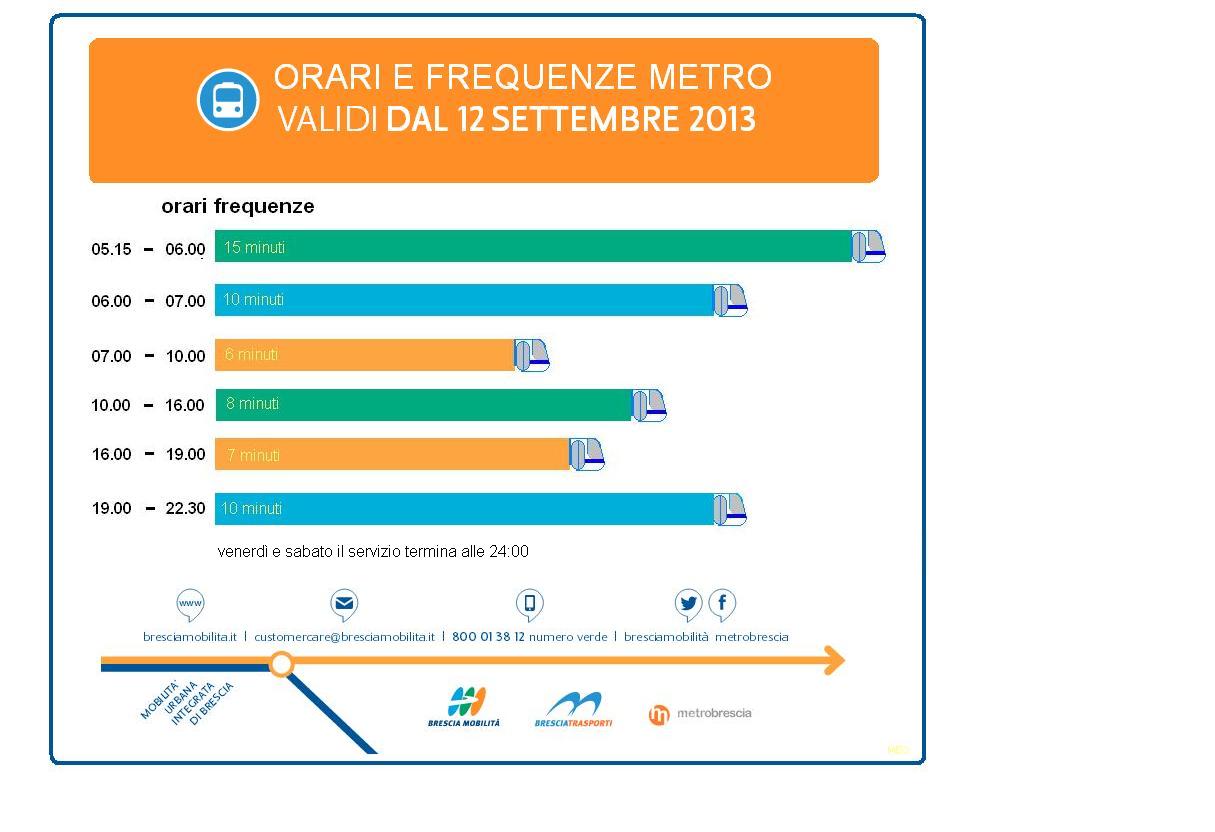 The metro of Brescia is a light rail system that moves to a mid-sized urban reality as Brescia ( about 190,000 inhabitants) all the advantages of an innovative transportation system , modern and fast. The trains, small and full automated (no driver on board), are electrically powered and they travel in their own seat , on rail and along a path entirely protected without being impeded by road traffic. Systems of this kind , established since the 80s , are characterized by small size and high frequency. The result is a far superior performance with regards to the traditional surface transit, in terms of regularity and frequency of service, capacity and speed.

Almost one year after the inauguration the mayor of Brescia illustrated the results achieved in terms of passengers and impacts on traffic and environmental aspects.

The history of the project of the metro system in Brescia was very troubled, partly because it was not initially promoted and supported by the citizens. Two referendums in 1998 and 2001 were launched to assess the opinion of citizenship about the realization of the work. The sufficient quorum was never reached, but the citizens against the project won twice, so the result wasn’t taken into account. 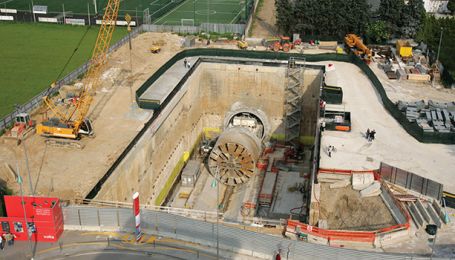 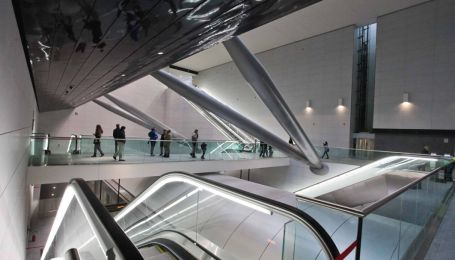 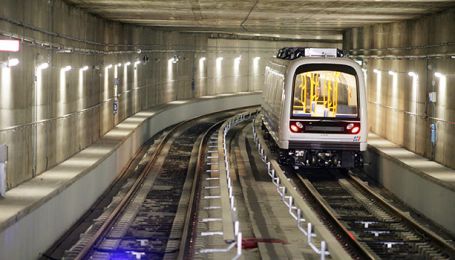 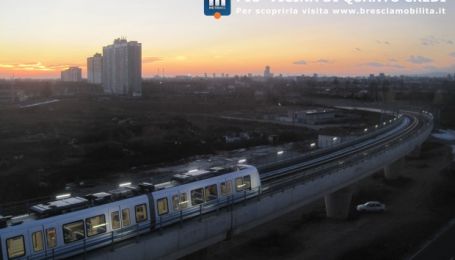 A segment in viaduct. 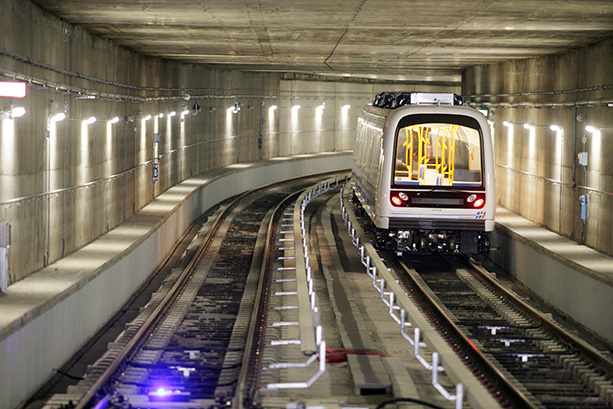